About five years ago I toddled off on the Eurostar to Paris where I was to spend the following five months. One minute I was waving goodbye to Mummy and Daddy at Ashford International; the next I was lugging two massive suitcases onto a bus outside the Gare du Nord. Within twelve hours, I had:

Turns out it’s actually really difficult to live, work, communicate, and access healthcare and banking in a foreign country when you know literally no one within a 100-mile radius.

Having said that, Paris is such an amazingly beautiful place that I thought I’d put together a travel guide of my favourite landmarks. All the places highlighted in blue are pointed out on this map:

Notable only as the terminus of the Eurostar, the Gare du Nord will provide you with your first dingy glimpse of the City of Light. Don’t make the mistake of lodging near it for convenience. It’s really not that nice.

La Madeleine church, bizarrely, looks more like a Greek or Roman temple – an extremely Classical rectangular building surrounded by all sorts of similarly named public spaces: Place de la Madeleine, Madeleine tube station, Rue de la Madeleine, Café Madeleine … As my namesake, this was the first place I came once I’d dumped my two suitcases chez moi. I noticed that two of my favourite composers (Saint-Saens and Fauré) were inscribed on the wall as former organists; and I later came back for a Puccini concert. Wandering around afterwards, I discovered that tonnes of the famous landmarks are within walking distance: the Place Concorde is just down the road, from which you can see practically every Parisian monument: the Champs Élysées, with the Arc de Triomphe at the end, and within its arch the newer Grande Arche, situated at La Défense. Directly opposite the Madeleine, across the Place Concorde and the river, was another Classical building. When I got a bit closer I could see the lettering on the outside, spelling out L’Assemblée Nationale – the French parliament. Then opposite the Champs Élysées were the Jardins des Tuileries with the Louvre at the end.

10 minutes’ walk from La Madeleine is the famous opera house (and there is a more modern one at Bastille too, where I saw Verdi’s Forza del destino). Go behind the opera house to have a little window shop at the Grands Magasins – the Harrods and Harvey Nichs of Paris. Beautifully architected with whimsical Christmas windows (e.g. ten dwarf Karl Lagerfelds frolicking in some snow).

Heretically, I never actually went inside this former royal palace. Being a real (temporary) Parisienne, I scorned this tourist pursuit and its accompanying queues. It’s beautiful from the outside, has great views down to Place Concorde, Arc de Triomphe, Grande Arche (just faintly in the heat waves of the cars on the Champs Elysées), and a lovely garden (the Tuileries) where you can sit and read in a reclining chair next to the fountains. You can also pick up some great pick-up tricks here. One fellow Parisien assiduously attempted to invite me for pizza, with the unusual approach of complimenting my strong arms: apparently I looked as though I might work in a bar pulling pints. Then you can walk from the Tuileries along the river (on the rive gauche/south bank), past the Musée d’Orsay, and arrive at Ile de la Cité, picking up a second-hand Flaubert from the booksellers that line the riverside boulevard. Although this is arguably the centre of the city, it would be foolish to attempt to ‘go out’ anywhere nearby, unless you’re a millionaire. 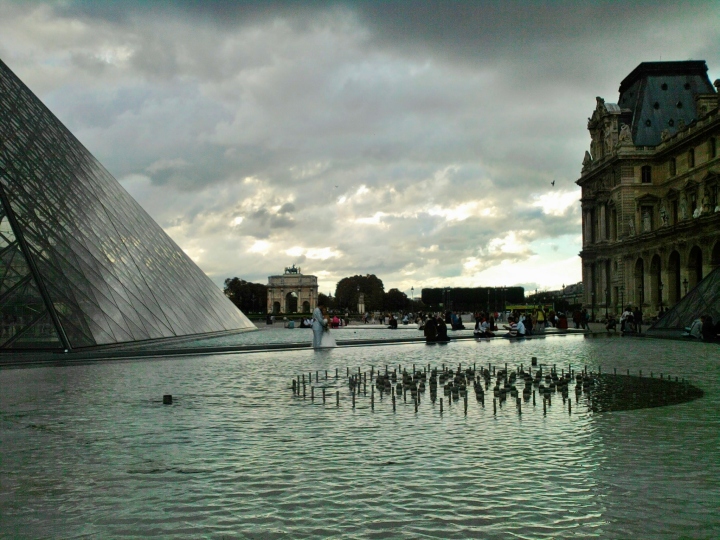 The Orangerie museum is next door, housing the famous Monet Nymphéas (Waterlilies). These giant paintings of waterlilies and their reflections are very beautiful and impressive, stretching for metres and metres across the curved walls. These are just as worth seeing as the probably over-hyped Mona Lisa, and require much less waiting around.

This gothic masterpiece is 800+ years old, which is insane. Don’t expect to be able to concentrate as the organ crashes through Vespers; there’s always a constant train of shuffling, photo-grabbing pilgrims making its way around the church. Don’t be one of them. In honour of, I tried reading the eponymous Victor Hugo classic, but found it too boring to continue past the first few pages – sorry Victor.

Other notable features of the island include Sainte Chapelle, an amazing little disused chapel that envelops you with some of the most beautiful stained glass, and Hotel Dieu, a hospital just across the cathedral parvis. I was sent here after a piece of grit flew into my eye in the street one day, after I finally dragged my pain-addled, half-blind and drowsy self to my local hospital, who sent me to see the ‘eye specialist’ at Hotel Dieu on public transport, holding the affected eye with one hand and clutching my EHIC with the other. There, with barely two words spoken, a nurse removed the grit, glued my eye shut with yellow paste and stuck a pirate plaster on. I’m pretty sure I burst into tears and was ushered out with little ceremony and less sympathy.

I wouldn’t greatly advise attempting to eat anything in the vicinity, as it will all be marked up for the tourists. You know better; head south across the river to the Latin Quarter or St Germain.

After a few weeks in Paris, you might well be sick of this monument. It pops up in the distance in pretty much every photo, and up close you see that it’s constructed of some rather ugly almost rusty-looking metal. It redeems itself at night, when it sparkles for five minutes every post-dusk hour. Best viewed from afar unless you’re going to ascend, which is probably worth the wait. Not that you’ll be queueing, anyway. You’ll be jumping in at the side like a true Parisien. And if you’re there, you might as well walk along to the Hotel des Invalides, another incredibly impressive classical complex housing military museums and Napoleon’s tomb.

Head for the Jardins du Trocadéro for the best view of the Tour, and for the Christmas fair and its ice rink.

Less interesting for the shops than for the Christmas lights (a different arrangement each year) and Christmas market. Crepes are a bit cliché (and typically disappointing), so have a waffle (gaufre) instead, and wash it down with some vin chaud (like mulled wine but worse).

Montmartre feels very much like a village; away from the wide boulevards and the Haussman architecture, you’re into narrow alleys, shuttered houses and roads with a gradient.  Skip the funicular unless you’re really old or really lazy; the walk up is not too strenuous at all. Get off the metro at Pigalle or Blanche and hasten immediately uphill away from the nasty shops, lest you be mistaken for a pimp or a drug dealer. Once there, avoid being roped into being caricatured. Maybe go and try some frogs’ legs (they’re actually rather nice). Sacré Coeur, at the top, has beautiful mosaics and a lovely view of Paris. 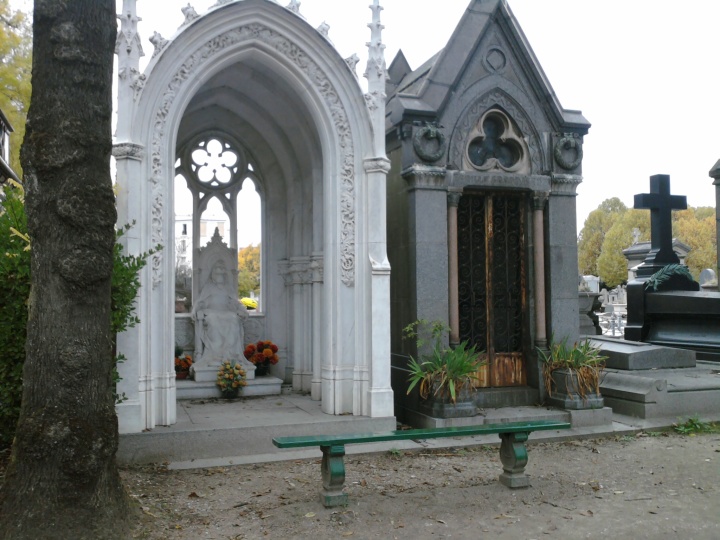 I had an absolute blast trolling around the graveyard with two friends one October afternoon; who’d have thought it. Not just for goths or the morbidly melancholy, the Parisian graveyards (of which this is the best) are a legitimate tourist attraction: very peaceful and tranquil. It’s massive (don’t try and see all your favourite dead people at once), so big that it’s divided into numbered sections, sort of like arrondissements, and the paths have names, sometimes according to who’s buried there, with the road signs resembling those you see elsewhere in Paris. Then the graves are often like houses on a street, ornate stone rooms with proper doors and windows. It’s like a city within a city. We saw the graves of Chopin and Proust, among others’. Chopin’s grave was quite well frequented, with fresh flowers and a nocturne emanating from among the offerings.

Montparnasse has a graveyard in the same style next to its big ugly tower, but it’s much less impressive.

Consider this a rive gauche hub, with beautiful gardens and a palace; within walking distance are the Eglise Saint Sulpice (beautiful), medieval Musée de Cluny, Rue St Germain with its scholarly bookstores and literary cafés, and the Panthéon, secular burial place resembling another classical temple or church, where the aforementioned Victor (and others) are entombed.

Versailles is a town in its own right, but obviously it’s most famous for the gold-fest of the chateau, possibly the most lavish stately home I’ve ever seen. 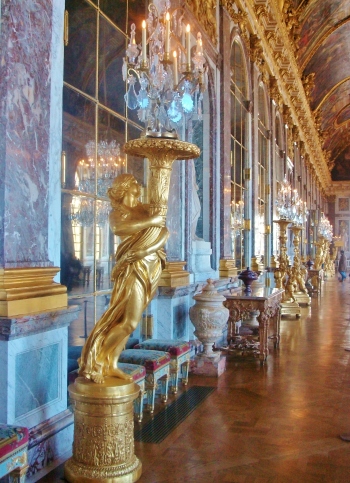 The famous Hall of Mirrors

I need this bedroom

A similar half-day trip could be to the Chateau de Vincennes on the other side of the city.

About 1.25 hours from Paris on the TGV, Tours is a cute little town with enough of historical note to keep you relatively interested.

I went here to meet up with a friend for one of France’s many public holiday weekends. We had steak au poivre and a carafe of white in a cute Tudor-looking square (a far cry from the Paris aesthetic), failed to access the medieval chateau (it was closed), went to see a great film in the cinema (Intouchables), and looked around the Musée des Beaux-Arts, which housed a strange mix of unremarkable old portraits, crockery featuring replica china fish and salad, and some grotesque vases with china animals crawling all over them. My favourite item was a harpsichord in a newly-made wooden frame, decorated in splashes of bright paint. We ate out for every meal, experiencing together the frustrations of having snooty waiters refuse to take your order in their native language.

To sum up, my time in Paris was by no means as idyllic/sunny/romantic as this little video might have you believe, but I hope that it (and this blog post) will inspire you to just go and eat some escargots in the Place du Tertre next time there’s a bank holiday.