Back in November I decided I needed to go somewhere far far away, and booked my first ever solo holiday and first ever trip outside of Europe to Sri Lanka, Singapore and Thailand.

Here is instalment two of my holiday mementos: 2 days in Colombo, capital city of Sri Lanka. Read part one here. Places highlighted in blue are pinpointed on the map. 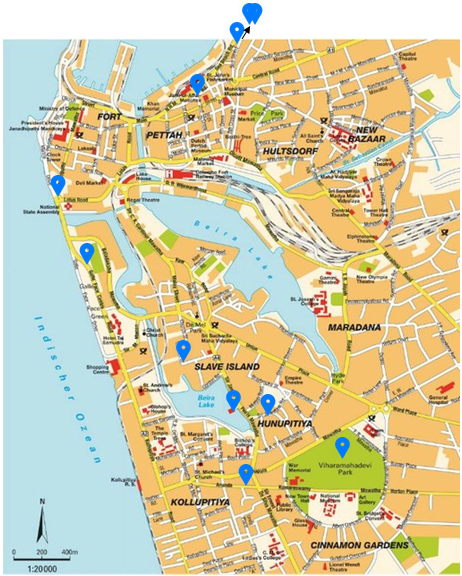 A wee bit shaken by my tuk-tuk experience of the day before, I decide to take a real taxi from the hotel opposite up to Pettah, supposedly the heart of the city near the port. While walking the fifty yards between my house and the hotel, two tuk-tuk drivers pull up beside me, beeping. I’m sad that I appear so obviously a tourist in need of a ride. It only gets irritating the fiftieth time.

It’s probably my pronunciation, but the taxi driver doesn’t seem to know any of the three tourist destinations that were recommended to me by Lonely Planet; without phone reception or internet, it’s quite difficult to show where I’m trying to go until I spot a landmark from my printed-out map. Lucky I came prepared. He drops me off at St Anthony’s Shrine, an anomalous Catholic church in the heart of this otherwise not-at-all Western place. I am alone, unreachable, and the only tourist in sight in what feels like a scarily busy, delapidated area, so it feels like a refuge. Yet the church is also weirdly culturally similar to the rest of Colombo as observed so far. It’s architecturally plain, but with gold adornments and shiny materials; the statues are the same gaudily colourful, plasticky types I’d seen in the temple the day before. The worshippers circle the church and methodically touch the pictures and statues, again as I had seen in the temple the day before, and as I had never seen in Europe.

Next stop: Shri Ponnambalawaneswaram Kovil, a couple of minutes’ walk up the road (off the map). This must be a Hindu temple, as there’s a cow tethered outside. Later I grew to recognise the concentric square structures and zigurrat-type carving over the entrance (I think called a shikhara) as typical. As always, I remove my shoes and start walking around the outer square. The outside is relatively plain, with red and white striped outer walls (again, I came to recognise this later on), and the odd white building housing a picture or flower-garbed statue (reminding me of the Parisian graveyards’ elaborate mausoleums).

Inside, the temple is dark, surrounded by another square walkway with heavy stone pillars around what seems to be the inner sanctum, where there are people praying in front of a golden statue. There are few decorations except some carved stone buttresses and, oddly, a coloured rocking horse in one corner. As I go in, I’m told that there’s a set route to take; you can’t just wander in all directions.

Back into the sunshine and out of what felt like a quiet haven, I’m starting to freak out a little. The way to the next temple is down a narrow shabby street crammed with motorbikes, tuk tuks and street vendors, many of whom are staring at me. I’m feeling even more conspicuous than the day before; I’ve lost faith in the map and my ability to communicate with others. Yet I press on down the street, blithely attempting to make the most of my holiday while avoiding the most dirty patches of road, anyone’s eye, and getting pick-pocketed (note that I don’t think this should have been a concern. My Airbnb hosts were away when I arrived and left the keys hanging from the door handle covered only by a piece of paper clearly marked ‘for guests’, so crime must be low).

I hang around New Kathiresan Kovil for a minute hesitating over whether to go in; I still wasn’t sure I had the right to enter the places of worship as a tourist and didn’t want to be insensitive. But a guy on the street approaches me saying I can go in if I remove my shoes, and starts to accompany me. I struggle to judge whether my compliance makes me more vulnerable, but I do want to see the place, so I follow him in, where I’m handed over to a slightly creepy older man who anoints my forehead and then insists on accompanying me round the temple, directing me to photograph the most artistic features (which I didn’t, partly because I didn’t agree on his assessment of them and partly because I felt that resistance showed I wasn’t to be messed with), explaining things about the different gods, and telling me he has 68 children (lost in translation?). Perhaps this was unfair of me, but I was glad to get away. 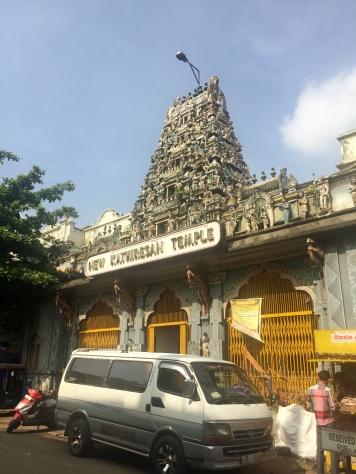 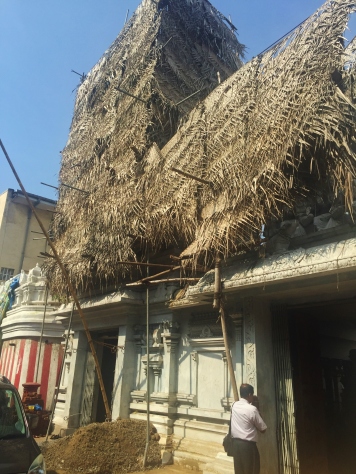 I don’t know why part of the roof was thatched

The Red Mosque is a few minutes away again. It was still under construction, and visitors only have limited access, but I catch a few striking views of the red and white tiling. Here too, the worshippers go barefoot.

Then it’s back to the street and to culture shock. It’s so hot I desperately want a coca-cola, but there isn’t a cafe or restaurant in sight; another reminder of the paucity of tourists and perhaps of a culture that doesn’t thrive on leisure. 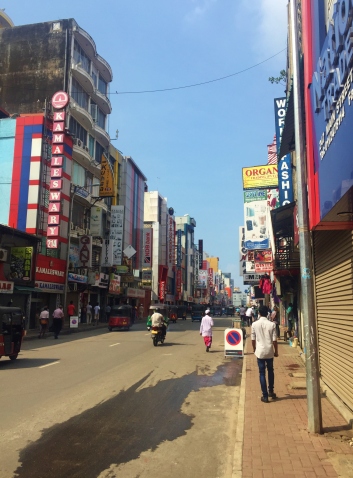 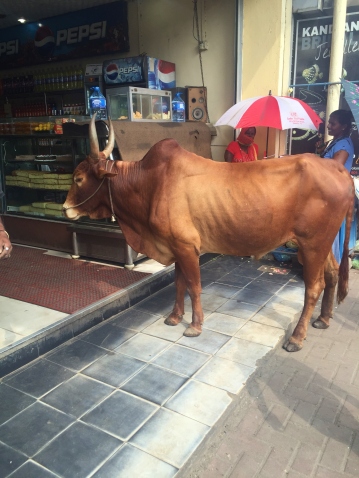 I take a tuk-tuk along to the seafront, getting off at a big roundabout next to Galle Face Green. Here there is a big Neo-classical government building, the US embassy, and some smart hotels. I pick a second-tier one (feeling that once again I would not fit in with the other 5* clients in my magenta maxi) with a friendly doorman who remarks jovially upon my forehead adornment. I wonder whether I’m making a faux pas the equivalent of wandering into St Peter’s sporting a glow-in-the-dark rosary round my neck. But I press onto the cafe where I drink some coke and ponder my next move. The coke here has a different sort of sweetness to it, and bafflingly the label feels the need to specify that it does not contain fruit.

The plan had been to catch a bus to Kelaniyah Temple, a highly recommended destination slightly outside the city. However, a wave of jet lag hits, so I decide I can still experience authentic living just as much by going home to read Shantaram under the ceiling fan while watching out for rogue insects. So I head south down Galle Face Green, setting eyes on the Indian Ocean (!!) and being stared at. One teenage boy shouts out, imploring me for ‘just one selfie!’. Can I talk about a media hegemony still out to colonise the rest of the world with the dregs of our deplorable culture?! Why on earth would you want a selfie with a random (female, white) tourist anyway?!

It becomes more Westernised the further I go down, with banks and luxury apartments under construction. I buy some loose trousers with elephants on (still one of my favourite items of clothing) in a mini shopping mall and have a distinctly Western lunch in a cafe called Sugar. I would have preferred some local food but, frustratingly, it’s not to be.

The Gangaramaya temple’s Meditation Centre lies on my way home. It’s a square wooden pagoda on stilts above a lake, flanked by lines of Buddhas in varying shades from bright bronze to matte blue-green-grey. There’s not much inside, but it’s fun to stand outside looking over the hazy lake to the few skyscrapers rising up on the opposite bank. Unsurprisingly, two young men decide to chat to me as I recover my flipflops at the exit (‘Are you alone?’ … ). 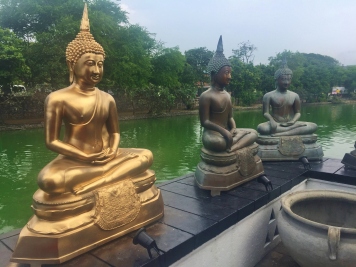 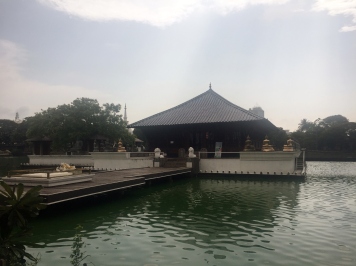 Just down the road, there’s another park on an (artificial?) island, reachable via a metal suspension bridge. The park is particularly dense with young canoodling couples and interesting wildlife: I saw a heron, flamingo, turkey and a large recorder lizard!!

Dinner at a great Indian restaurant around the corner from home – The Mango Tree. Loved everything except a gross drink called jaljeera: supposedly ‘Indian spiced lemonade’, it had only a very faintly sweet aftertaste, but it mainly tasted of curry, with some initial notes of egg. And what to make of the fact that every different sauce flavour was described as gravy?