I’ve already written about my time in Sri Lanka and Thailand and am finally getting round to posting my tips and pics for Singapore, which was the second stop on that trip. There is one more stop to come: 8 hours in Dubai!

Singapore is one of my favourite cities in the world. Every time I think about it I get a warm fuzzy feeling. I desperately want to go back. I honestly can’t recommend it enough. Just go! If you have time, explore (1) the downtown area, some of the (2) neighbourhoods, and (4) the Marina Bay Sands area. There’s also a section on day tripping to (3) Indonesia, but this is more of a cautionary tale than a recommendation. Food and drink recommendations down at the bottom, and cultural observations scattered throughout. You’re welcome.

Cultural observation #1: one of the first things that will strike you when you get on the metro (besides its freakishly spotless condition) is the cultural mix. Singaporeans are typically of Malay, Chinese or Indian descent, but there is no feeling of segregation. It feels excitingly and genuinely cosmopolitan

^I discovered you could make sped-up video on the iPhone …

Spend a couple of hours wandering around the shorelines: this city is built for pedestrians, with walkways accommodating amazing views at every turn. It’s all beautifully lit for a twilight wander too.

Twilight is the prettiest time to see the sights in my opinion! You can get regular tours from Boat Quay that circle Clarke Quay and the Fullerton and take in the marina area near MBS. 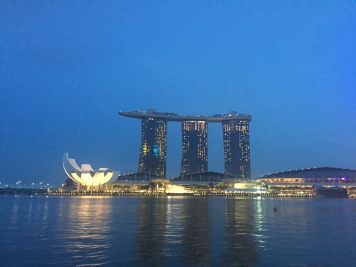 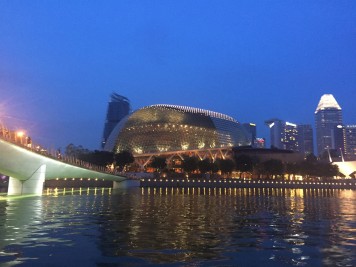 Jubilee Bridge and Theatres on the Bay

Cultural observation #2: no one here is obese. I imagine this is because every man has to do 2 years of military service aged 18-20, and has to go back for compulsory training and a fitness test every year until the age of 40. Women are exempt. 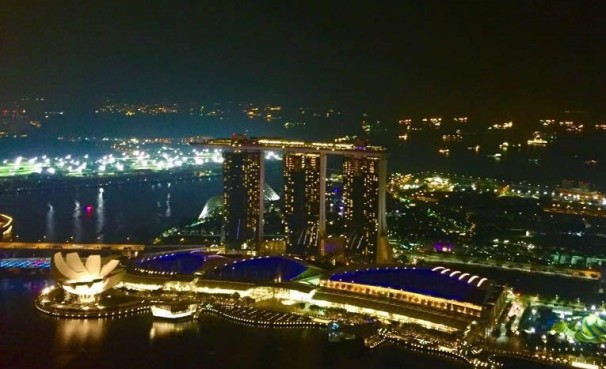 This is supposedly the tallest rooftop bar in Singapore and has amazing panoramic views that make even MBS look teeny-tiny.

This is a bit of a walk from ‘real’ downtown, but worth a visit. Built as a private residence in the early 1830s, it was converted to a hotel in 1878 and renamed Raffles ten years later after the founder of Singapore, William Stamford Raffles. Go for the pretty colonial-era architecture and air of class. It would be appropriate to order a Singapore Sling, as the cocktail was invented here, but I went for a meagre Sprite in the interests of my bank balance. Still, it came in a glass decanter – not a can in sight. The breeze through the pretty white courtyard, surrounded by discreet boutiques tucked into the arcade, makes for welcome respite from the humidity. 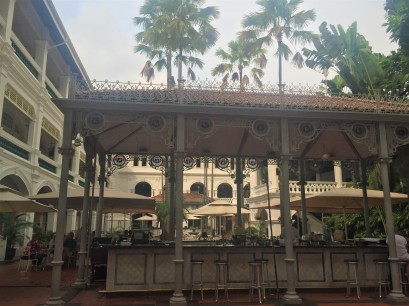 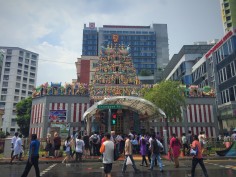 Little India feels a bit more impoverished and a little less tourist friendly than Chinatown. The streets were very busy, as it was Diwali. I saw some very colourful houses, and the Hindu Sri Veeramakaliamman temple, with the garish entrance tower and the red-and-white striped walls that I recognised from Sri Lanka.

Cultural observation #3: Diwali or Deepavali took place while I was there. My Airbnb hosts were Hindu, and it was so interesting watching them prepare to celebrate! They put flowers and lamps in one corner of the living room floor, and a chain of leaves across the top of the front door. The mother went through every room holding an incense lamp to each corner to purify the room. Traditionally people take a bath in oil, and rub the oil off with green peas.

Kampong Gelam is the quarter around the Sultan Mosque, with road names like Arab Street and Baghdad Street. Arab Street is all fabric shops, carpets and jewellery. I had some falafel and hummus for lunch and bought some gorgeous embroidered cushion covers that are currently gracing the sofa of my flat …

Cultural observation #4: everyone here speaks English (or Singlish!), and school lessons are taught in English, but not by first-language English speakers. This means that no one’s English is quite grammatically perfect. But weirdly it would feel out of place to correct anyone. The point of speaking English here isn’t actually to sound like you went to boarding school in Surrey. It’s to make yourself understood among people with different first languages. So it doesn’t have to be perfect, it just has to work.

On one of my free days, I decided to take the one-hour ferry to Batam Island. I thought it would be cool to say I’d been to Indonesia. But I didn’t plan very carefully and I only had a few hours there. I think the whole trip can be summed up by this exchange with the lady at the ferry information desk:

Me: So, what is there to do in Batam? 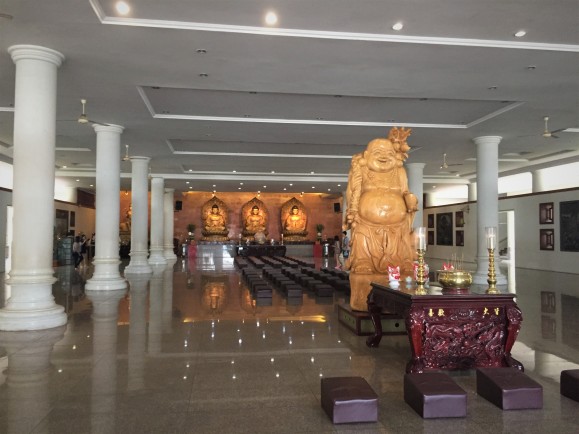 One landmark I found was South-East Asia’s biggest Buddhist-Taoist temple, Maha Vihara Duta Maitreya. It’s very spacious inside, with gold statues and a pleasant garden. I noticed that there were offerings in front of each statue, but not the usual flower offerings I’d seen in Bangkok and Colombo: more like everyday branded food in its packaging.

I didn’t have much more time to explore, so I went back to the town where I’d got off the ferry. I’d spotted a shopping mall, so went inside to find some food. The shops were full of designer knock-offs, some even with fake labels saying: ‘Questo contiene certifciato di autenticita’ – if nothing else, the inauthentic spelling convinced me I wasn’t looking at genuine Prada.

I’ve been on the end of some aggressive salesmanship in my time, but the shop assistants’ methodology – approaching me the minute I crossed the threshold to ask what brand of knock-off I fancied, and then following me, inches away, as I edged around the three metres squared shop – was something else.

I sat down in the food hall for some Chinese food, and it was then that I encountered the phenomenon that is Panties Pizza:

Not sure what to say about that.

I would have had a better day with more time and better preparation, but at the very least I came away with another stamp on my passport.

Cultural observation #5: No Singaporean owns a winter coat. This is because Singapore does not have seasons. Every day is a very pleasant, sometimes overcast, 30 degrees, with a touch of humidity, and five minutes of torrential rain every afternoon.

As promised, the best stuff is over the other side of Marina Bay, sitting atop 360 hectares of reclaimed land: that is, the hotel’s 55 stories and near-1000 rooms, a casino, huge shopping centre, and exhibition hall, occupy a man-made peninsula.

If you walk around the bay, you can’t fail to notice the long lasers that shoot out of the top of MBS and up to the clouds or down to the water. They find a use during the light show, a cornucopia of ingenious laser effects, videos projected onto screens of water, music, and dancing jets of water. Here is a wee clip:

Gardens by the Bay 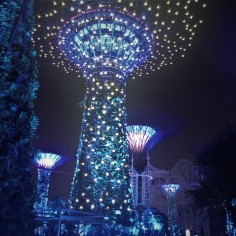 Gardens by the Bay, Singapore

The Garden Rhapsody light show at Gardens by the Bay, however, is EVEN BETTER! I wrote in my travel diary that it was one of the best experiences of my life (“!!!”). The trees light up, sparkle and pulse along in different colours to a soundtrack of uplifting, even epic tunes, ending with The Lion King‘s ‘Circle of Life’. It’s very easy to find yourself walking among the tree ‘roots’, eyes fixed upwards, with a silly involuntary grin on one’s face. Honestly incredibly beautiful.

It’s best to go into the gardens, but you can also see the tops of the trees from a viewing platform accessed by entering the MBS shopping centre and following signs for the gardens, which takes you to a viewing platform on the other side of the hotel, accessed via a passageway literally suspended many stories in the air through the middle of the hotel’s cavernous foyer. 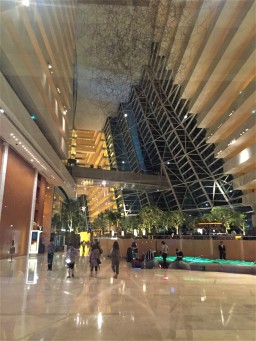 And finally … if you stay in the hotel, you get to use the infinity pool on the Skydeck, that cruise-ship-type structure perched atop the three towers. If you are not so privileged (but still incredibly privileged), you can hop in the lift and get a cocktail at the rooftop bar. The evening was overcast, and a storm was brewing. Dull reddish flashes and the occasional actual fork fired behind the banks of cloud, perfectly positioned above the downtown skyscrapers that you could see at eye-level just across the bay. With the green lasers roving over the water and the skyscrapers opposite, and the white lasers shooting up like bars and terminating in the clouds, everything felt connected. It was perfect. I felt like Lyra at the end of The Northern Lights, watching as her father shoots a bolt of energy into the sky to break through to another world.

Tl;dr: tropical weather, teh tarik, and cocktails at Marina Bay Sands. I can’t wait to go back!!!

Bonus: what to eat and drink 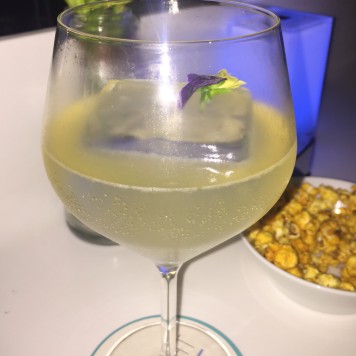 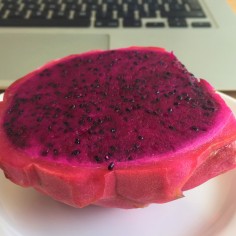